If you’ve never heard of PEMF devices or PEMF therapy, it’s pretty interesting. And I think you should stick around…

PEMFs are very different to EMFs, which is just electromagnetic frequency, which is harmful.

You’ve heard me talk in other videos about EMFs and how certain devices, especially things like electronic fans and really anything that involves moving parts, but also things like big led TVs.

Like for example, this one or just devices like that, they produce these harmful EMFs, which are bad for your sleep, the bad for your health, the bad, for all kinds of things.

So I’m actually going to talk about a specific device a bit later on, but before we do that, I just want to explain a bit more about PEMF therapy and how it’s actually really important.

What Is PEMF Therapy Or PEMF Devices?

They can help you focus.

They can really do a lot of different things, much like binaural beats. However, these have a lot more research and science behind them. And this is why I thought you might find this interesting.

Full disclaimer: This obviously is not medical advice. This is not professionally regulated. This is just my personal opinion, my experience with these things. And I wanted to just let you know about some interesting research that I’ve found, which kind of shows the efficacy and benefits of this type of device.

So basically it involves a device much like this: 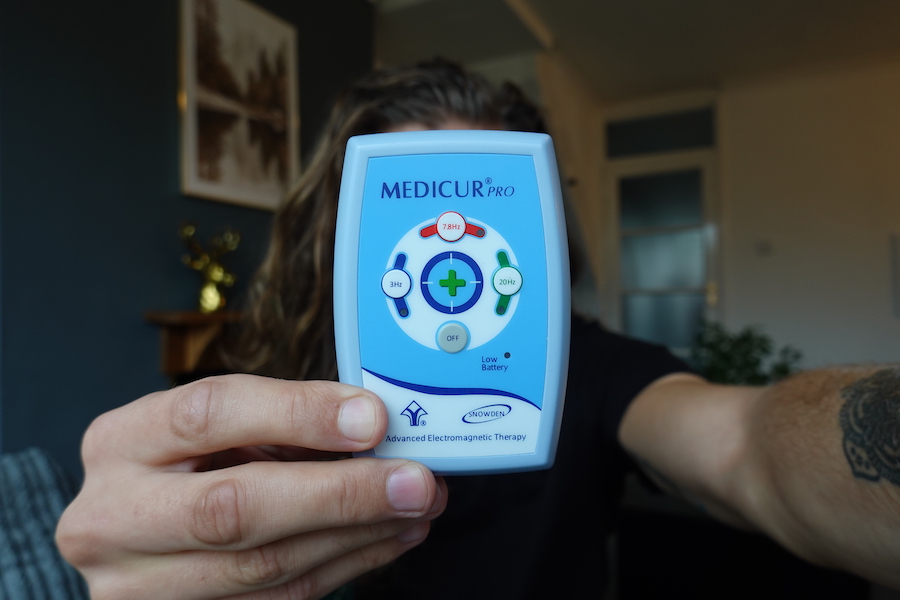 This is an example of a device that can do pulsed electromagnetic therapy (PEMF), but there are many different types of devices as well.

Is There Proof PEMF Works?

There’s been a lot of interesting research that shows how these work.

There was a randomized double blind controlled multicenter study in 36 subjects with lower back pain or radiating leg pain after it was like a type of surgery, after lumbar surgery.

So basically just testing to see, can these devices reduce pain if you have chronic pain from something.

What were the results?

This is pretty interesting…

If you have pain, obviously, then that’s kind of one benefit of a PEMF device.

Other Benefits Of Using PEMF Devices

PEMF devices are not just used to treat chronic pain. There are actually lots of benefits of using them in day to day life, to help you ‘harmonise’ with the Schumann resonance (7.83HZ). This will reduce inflammation, and help you sleep better.

I’ll explain more about that soon.

On my device the Medicare Pro for example, There are four options to choose from, four different frequencies that you can get this thing to pulse at like the Schumann resonance.

The Schumann resonance is 7.8 Hertz.

7.83 Hertz specifically is known as the ‘Schumann resonance’. This is basically known as the fingerprint or the vibratory frequency of the entire earth.

And this is not some hokey random spiritual, new age stuff…

There’s a lot of science behind this.

Studies On The Schumann Resonance Found Some Interesting Things

A German scientist by the name of Hans Berger, using an EEG machine recorded an electrical frequency that was transmitted by the human brain.

So basically what this is, what this has found is that there’s a certain frequency known as the Schumann frequency, which not only does the earth vibrates at naturally, but our own brains emit the same frequency.

It’s almost like a foundational base level frequency, where everything emitting and receiving this frequency is in balance. The problem is, and I’ll get onto this later, is that a modern electronics and systems and you know, the way that things are set up now means that the Schumann frequency, the Schumann resonance is kind of lost and scrambled.

And that creates big problems.

However, when you get back into tune with the Schumann frequency, lots of really interesting things start happening. You start healing, you start reducing and reversing a lot of these negative effects that we’ve been feeling, for the last 100 or 200 years.

So what’s interesting is the Schumann resonance, not only was it similar to the frequencies emitted by somebody’s brain, but it’s identical to the alpha waves that the brain emits.

This frequency controls our creativity, performance, stress levels, anxiety, and even our immune system. When people are exposed to the Earth’s natural frequency of 7.83 HZ, they experienced these benefits and enhanced learning, enhanced memory, body rejuvenation, balance, improved stress tolerance, even anti jet lag.

For just listening to a particular sound or frequency.

On the other hand, and this is what I really want to focus now, when you REMOVE that frequency, the 7.83 Hertz Schumann frequency from somebody, they start to experience negative effects.

They start to become in misalignment with themselves.

They start having illnesses and conditions and chronic pain, emotional distress, and even other health problems.

The atmosphere of the earth is actually quite a weak conductor…

So if there was no source of electric charge for the atmosphere, its energy will dissipate in about roughly 10 or 20 minutes, but it doesn’t do that. Why does it not do that?

The area of the earths atmosphere that stretches between 30 and 600 miles above the surface. And along with the upper atmosphere forms kind of a boundary. And this has been spoken about before, many times…

The idea of there being a boundary between earth and space.

So what happens is, due to solar energy or solar radiation particles get kind of trapped in between the Earth’s surface and the upper atmosphere, they get trapped in this layer.

This creates what are known as ‘positively charged ions’.

And this is very important later on…

Between the earths surface and the ionosphere is a cavity containing the electrical charge of 500,000 coulombs, there’s a lot of energy.

There’s a vertical current flow between the ground and the atmosphere and roughly, and this is really quite interesting.

There were roughly 2000 lightning storms at any given moment in time producing 50 flashes of lightning every second.

If you know anything about lightning, it’s an incredible mind blowing amount of energy that is released in a very short space of time. It’s really impressive. And so the idea that there are 50 flashes of lightning hitting the earth at every second of our time of time is really interesting.

So each lightning burst creates these electromagnetic waves that begin to circle the earth in the cavity, the space between earth surface and the ionosphere.

What actually happens, is that the lightning that strikes the earth literally ‘balances out’ the other frequencies that are resonating, meaning that earth is held constantly in a perpetual frequency of this Schumann resonance, the 7.83 Hertz.

BUT something went wrong:

When we as a species, moved into these busy cities, we developed this civilization and we took ourselves away from nature so much, and we started introducing other frequencies, much higher frequencies than the 7.83 Hertz that were designed to be living in.

What happens is these higher frequencies, especially, you know, and including, and especially things like 5G towers and really high frequency, really weapons…

Energy, weapons, and frequency weaponry, this massively disrupts and natural Schumann resonance of 7.8, three Hertz. And so we start to experience disease.

We start to experience chronic pain, distress, depression, bad sleep, and all of these other kinds of things, but what the devices like the one I shared will actually do, is balance this out!

But let’s not get ahead of ourselves.

Really there are two ways of getting back in touch with that Schumann resonance, the 7.83 Hertz, number one, you could ‘ground’. And so when, when I say ground, I mean, you go outside, you take off your shoes and socks and you literally stand on the soil.

What ‘grounding’ does is it allows the charged particles, if you will, to equalize themselves, they will go into the ground because your feet are touching the soil.

And especially if the soil is wet, you know, if it’s just been raining or something, it’s a good conductor. So you will then release these charged particles and equalize your frequency. This is one way of doing it.

However, most people don’t want to go and stand in a muddy field with their shoes and socks off.

It’s fine in summer. It’s great to do in summer to go out and walk barefoot everywhere, but in winter, or if you are in a climate or place where the weather is not so good, you don’t want to do that.

How To Get Back Into BALANCE With The Schumann Resonance

So how do you get back in touch with that same frequency that we should be living with? Well, that’s where these devices come in, the PEMF devices because they actually will pulse this electromagnetic frequency.

They’re designed to do this.

Take for instance, the Medicare Pro PEMF Device I mentioned earlier. This is clinically tested to actually reduce pain in a medical setting within the NHS, which is the UKs kind of national health service system.

I’m not going to spend too much time talking about this because the chances are you’re in America or you’re in another country. You’re not in England. And so this is relevant to you because you can’t buy it.

If you are interested in this specific one, you can find it here.

As you can see at the very top here, it has a button which says 7.83 Hertz. So you can tune into the Schumann resonance quite easily.

What you’ve got to look for in a PEMF device, is as long as they can tune into the Schumann resonance, which is 7.83 Hertz, if it has that in the description anywhere, you’re good to go.

And it’s going to really help you get back into balance with the Earth.

Are You Skim Reading This?

If you’re skim reading, basically the earth vibrates and resonates at a certain frequency called the Schumann resonance, which is 7.83 Hertz. This helps us to stay in balance and heal.

Things like emotional stress and illness and everything, modern technology and especially 5G towers and modern high-speed internet and radio waves disrupts that frequency.

We need to get back in tune with that frequency to kind of be in harmony, easiest ways of doing that is to go outside and stand barefoot in a field, because then you will release the charged particles and you will rebalance your electrical energy.

The second best way is to use device like a PEMF device. Like the one I just showed you the Medicur pro. But if you’re in US or anywhere, really other than England, you cannot get this one.

There are lots of other devices. I will put links to them, but you can just search on Amazon. You want to look for the devices that have the ability to pulse at 7.83 Hertz.

If you are interested, I have on my other site, AstralHQ, a package called the shifting vibrations package, which is a series of audio tracks that are tuned to certain frequencies. And they will do a similar thing.

They’re not quite tuned to the Schumann frequency, but they are tuned to things like the golden ratio and various other important and very powerful frequencies. So check it out.

And I thought this would be interesting, especially for those of you who are maybe skeptical about things like this, the idea that frequencies can affect our mind and body is well-documented.

In fact, it’s so well-documented, that things like this are clinically tested and used in a medical setting.