How To Build A Sensory Deprivation Chamber At Home: DIY Tutorial

How To Build A Sensory Deprivation Chamber At Home: DIY Tutorial

You’ve had your first float experience, and you’re hooked, right? Float centres, or R.E.S.T providers, are often people who converted to this method of relaxation and getting back into touch with themselves, and are now spreading the wisdom around to their communities.

Still, not everybody wants to give up their day job, and convince people to come experience “the nothing”. But… what if you could have one of these in your basement? What if you could pop it in that extra bedroom now that your kids left home? (Your kids are leaving home now, aren’t they!) 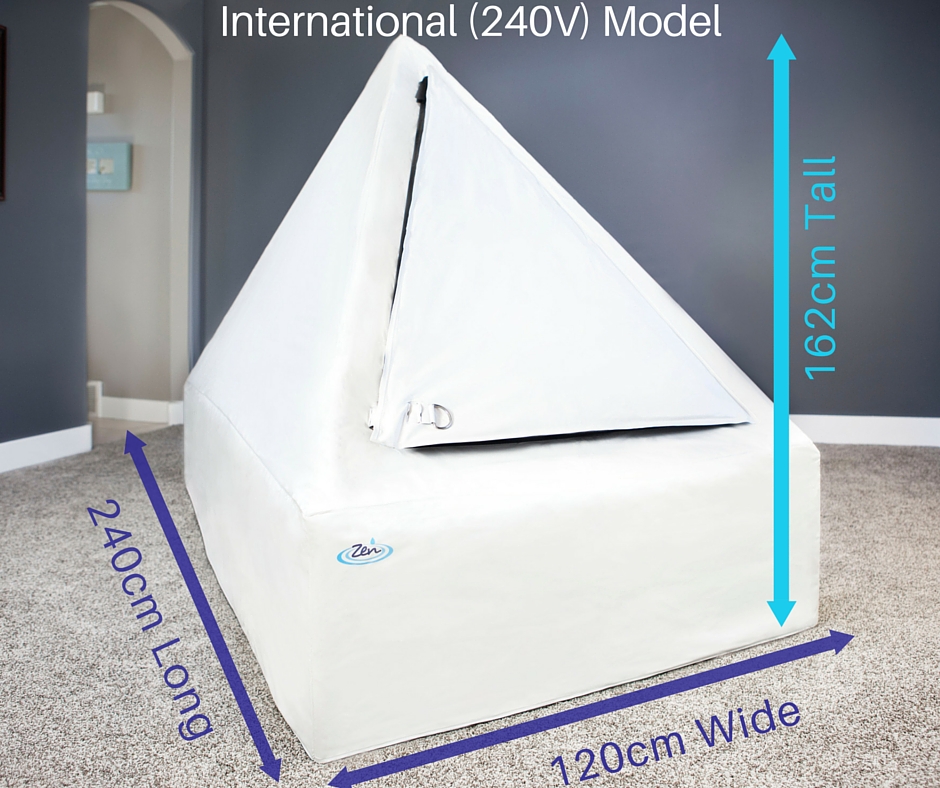 Before you get all excited and borrow someone’s pickup to go buy marine plywood and a caulking gun, here are a few things you can consider first.

If you’re into the suave edition in your private time aesthetics, you can go with a Dream Pod. They’re almost pretty enough to not bother with whether there’s actual water in the pod! Else, if you’re into the original version of things, Samadhi Tanks may be for you.

You can buy a Zen Float Tent™ isolation unit, that will deliver in about three weeks, and you can set it up with a friend in under an hour, and start filling it with water, Epsom salt or salt, and get to heating the water for your first float!

This Zen Float Tent is arguably the quickest and easiest way to get your instant gratification on, and it probably won’t be more expensive than any DIY project you’ll start.

This model uses a kind of metal pipe frame, which – according to the manufacturers, buckles a little when filled. They mention it matter-of-factly while showing you how to set up their tent tank in their video. I have visions of a kiddies’ pool, and that happy plastic smell you get when it comes out of storage at the beginning of summer, and of how much buckle my frame will add when I lay myself down in the water.

The Zen Float Tent™ model also ships with patch and solution, much like your grandad’s bicycle. While this is a kickstart project from Shane (whom you’ll meet later in this conversation), I’m not a fan yet.

How to build your own private float tank

So let’s say your mouse button wouldn’t click on the previous link, and you’re still stuck on the DIY idea. You now have two basic options. The first option would be to dig into the wooden box with plastic wrap idea, that’s probably the cheaper of the two options. It’s a solid construction of flat surfaces, square angles and looks a little bit like the Samadhi version. Sensible.

You can get the plans with a quick search on google for DIY float tank plans 2006 PDF, and you can call that friend with the pickup truck now, to come help you get your two-by-fours and plywood sheets.

I suspect that this is a weekend job at most if you have the Timber dealer cut the sheets for you, and that you could get away with roughly the same monetary investment as your three-week-tent-tank.

I am a little concerned about the lack of insulation with this option too though. The energy costs of heating up this new box of yours may have the DEA knocking on your door thinking you’re hiding a grow room of some sort, complete with huge hydrogen lamps, right there in your basement. Still, it’s being used all over the world without major court cases! And frankly, nothing stops you from bringing your own expertise to the game, and adding more insulation to the design, right?

The second option would be a bit more demanding on your woodworking skills, woodworking equipment, and your patience. But – oddly, it really is the one I’m working on right now! This option is the original DIY version of Shane’s unit, who’s now thrown his weight in with the Tent team we discussed earlier.

In its simplest form, this is a plastic tank that’s strong enough to withstand roughly 540 Gallons of water pressure.  Some folks get tanks that were originally designed for fertilizer, or oil, and some parts of the world is so water weary, that you could buy a rainwater tank like this for roughly $200.

The trick is to make sure that the plastic used is safe enough to contain heated water, and withstand the corrosive qualities of your added chemicals. You’re looking for a tank that carries a couple of years’ warranty, just to make sure that the manufacturers understand the quality required of their product.

Go off to Youtube and watch the movie Float Nation – there’s a short section at about 44 minutes, showing the prototype built by IsolationTankPlans.com. It’s graceful, and the tips and tricks you’ll pick up on the videos and photos from Shane’s site, even before investing your $19 in the plans, is enough to swing your vote my way too.

So – here we are. We’re online looking for a plastic tank that will suit.

Then we’re looking for someone with woodworking genius whom I can coax with non-alcoholic beer and vegan barbecue to build the frame, fit the hinges, do the plumbing, stick the insulation down, fit the plywood in a dome over the top of the tank, and remember to throw a couple of LED lights into the base beneath the tank, to add a bit of ambience, before pop riveting the whole thing closed.

I’m also looking at an alternative to the wooden frame, of welded angle iron for extra strength. Let’s face it, once this thing contains 200 gallons of water, nobody’s going to dismantle it anytime soon. I’m way handier with a Welder than with a Reciprocating Saw, so heavy isn’t necessarily a bad thing.

In Shane’s plans, he had to split the tank down the middle to get it down the stairs, and into his basement. This makes for a more sophisticated look than the other DIY option with the toppled-over outhouse feel to it. Now – cutting your tank length-wise may be a sensible solution for your home, but I’m adjusting the plans a bit, to shave off the top lid off one end, and give me an easily hinged smaller door, to step into.

My tank will go in a little dedicated wooden shed outside my home, so I don’t have a problem wedging it down the stairwell. I’m taking down the front wall of my wooden shed, fitting my tank, and putting back the front wall.

This leaves me with a domed plywood shape, much like Shane’s, but a much lighter lid, and hopefully no hydraulic shocks to help me manage the top half of the tank by myself.

Will this make the difference for me? Will I fire up the heating system every day and make the time to check the hair trap, test the salt levels of the water? Or will I long for the wellness centre experience, the hassle-free approach, and the celebrity feel when I book another ten sessions.

Get started within 3 days: If you’re now thinking about just buying a float tank (which would still probably work out cheaper than getting the materials and spending the time to make it) you can get a great price on a modern home float tank here. It will be delivered in 2-3 days!