Blue Lotus: The Egyptian Dream Flower That Can Open Your Mind

Blue Lotus: The Egyptian Dream Flower That Can Open Your Mind

Blue Lotus (Nymphaea Caerulea) is also known as Blue Water Lily and the Sacred Lily of the Nile, and is an incredible herb that can be used to open your mind.

In this post, we’re going to explain EVERYTHING you need to know about Blue Lotus.

What Is Blue Lotus?

The Blue Lotus is aptly named for its distinct blue color, and was lauded by ancient Egyptians for its ability to induce sublime states of relaxation and mental sharpness. The plant itself is quite a stunner, with bright blue petals and an enchanting fragrance which has made it famous the world over.

Some refer to it as the water lily, as it tends to float gracefully over lakes, all the while imparting its distinctive aroma for all to enjoy.

You can actually buy blue lotus quite easily now by either clicking here or clicking the image below! (It will open in a new tab) 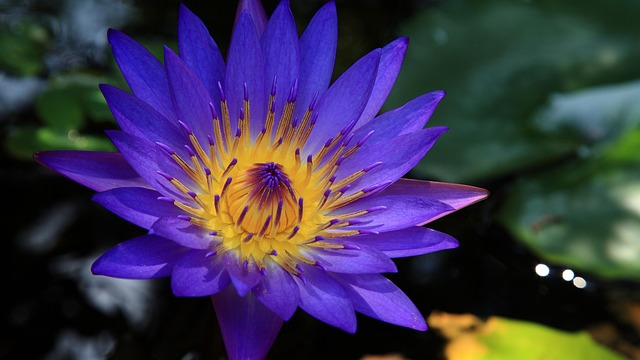 As a hallucinogen, the Blue Lotus is known for inducing a number of extraordinary experiences, depending on the dosage and potency, and these states could range from sedative effects, to feelings of euphoria, mild hallucinations and even sexual stimulation.

In this article, we’ll be exploring more on this mystical plant and find out just why it’s one of the most sought after lucid dreaming aids in the modern world, in juxtaposition to its significance in ancient Egyptian culture. Down the rabbit hole we go!

The History Of Blue lotus

The Blue Lotus plant was originally found in ancient Egypt, where it has grown abundantly along the Nile River for centuries. There, it has formed part of daily life and has been popularly used for a number of applications.

While some appreciated it for its mental sharpening abilities, others admired its aesthetic beauty, and women would often decorate their hair with it in order to enhance their beauty.

Fans of the occult used it as a sacrament to aid in widening their awareness and heighten their consciousness during particular ceremonial rituals, rite of passage initiations, as well as the celebration of specific harvests.

The Blue Lotus is typically taken as a tea, with a recommended dose of 5 grams per person, steeped in boiling water and then allowed to cool before drinking it directly. The Egyptians also used to soak it in wine for hours at a time, at the same dose of 5 grams per bottle.

How To Use Blue lotus

In its guise as an oil concentrate, the Blue Lotus plant is a very effective sedative. In fact, the absolute oil of this plant is so potent that just massaging it into the skin can instantly absorb the alkaloids, which then induces the effects that it’s so famous for.

Just be sure not to confuse the absolute oil concentrate with the essential oil, as the latter is made through steam distillation and has a reduced overall potency.

Nevertheless, it is still a viable method of consuming the plant and producing the desired effects.

That said the psychoactive effects of the plant are specifically found in the buds and flowers, which are then compressed into a sticky resin to make a hash-like substance that you can smoke, while a Blue Lotus tincture is available if you prefer that method.

You can also drink the plant as a tea, made by steeping it into boiling water and then allowing it to cool while absorbing all the aromas and activating its constituents for maximum effect, and soaking it in wine for several hours will also have the same result.

As you can see, there is an endless array of options to choose from when it comes to consuming the plant. You can smoke it, drink it as a tea, wine, or massage it onto your skin as an absolute or essential oil. Now let’s take a look at its effects to see what the after effects of consuming it are.

The Blue Lotus is quite tame when compared to other popular lucid dreaming aids, but it makes for an ideal plant to use for newbies. Its effects typically kick in within the first half an hour after use, and usually start out as a mild stimulant with a slight tingling sensation throughout the body.

The plant is also characterised by a heightened awareness, mental clarity, and a sense of serenity coupled with unparalleled euphoria. It’s also known as an aphrodisiac as it enhances tactile senses, and has worked really well for sufferers of erectile dysfunction that’s brought on by depression.

It can also be extremely calming, while producing uniquely detailed dreams with enhanced colors and vivid detail.

For those who want to enter a meditative state, then taking the plant as a tea is your best bet, while pairing it with wine works great when you just want to explore its awareness amplifying qualities and create a lively vibe during social interactions.

The actual dream trip of the Blue Lotus plant can only be described as unique, and usually starts while you’re still awake, and then seamlessly transitions to the dream state. It almost feels as though the dream state and the waking state blend into one and you’re able to experience life with penetrating sensitivity.

Apart from its psychedelic qualities, the Blue Lotus is lauded for its healing abilities as well, and is widely used as a sleep aid and natural stress reliever.

Some people believe that blue lotus is highly hallucinogenic. Others say that it does not affect the brain and it is just an old wives tale. There are many debates as to whether or not there is any truth to the stories of blue lotus being hallucinogenic.

Is Blue Lotus Good For Sleep?

For millenia, people have been looking for a natural way to induce lucid dreaming. Blue lotus is a popular herb used for this purpose and may help you know when you’re dreaming.

The use of blue lotus as a natural way to induce lucid dreaming has been around for thousands of years.

The blue lotus appears in a variety of colors. It has been used for centuries in the east as a culinary ingredient and a medicinal plant. In Ayurvedic medicine, it is considered to have cooling properties, alleviating skin irritations and improving digestion.

The blue lotus flower also contains alkaloids that can be toxic when consumed in large quantities.

In some cultures, it is known to be poisonous.

You’ll be glad to known that the Blue Lotus plant doesn’t come with any side effects in the form of a hangover or any type of dependency. Instead, it leaves you feeling relaxed, calm and incredibly euphoric. However, in rare cases of taking extremely large doses, one can experience hot flashes or even feel skittish and jumpy.

It’s also not a good idea to combine it with other drugs like painkillers and even cannabis, as this tends to end in feelings of queasiness and a confused or dazed state.

But these side effects are very uncommon and can be easily avoided by sticking to the prescribed dose of 5 grams per person, and consuming the Blue Lotus in its pure state without contaminating it with other drugs.

Unfortunately the Blue Lotus plant has been made illegal in a few countries, including Russia where it is completely banned. While the US has banned its use for human consumption, it’s still legal to cultivate, sell and purchase it. That’s why most stores sell it as an essential oil, tea, tincture or incense.

Chamomile, lavender, and chamomile are all herbs that can help you sleep or dream better. In addition to herbs, you can also use aromatherapy or essential oils to help you sleep better.

Aromatherapy can help to reduce stress and anxiety, which can help you get a better night’s sleep.

Some other herbs that can be used for lucid dreaming are Blue lotus, Henbane, Mugwort, Basil Leaf, Tobacco leaf.

Blue lotus, also known as nymphaea caerulea, is an aquatic perennial plant that can be found in fresh water. The root of this plant has been used in the hippie subculture for its hallucinogenic properties. But does it pose any risks to pregnant women? Preliminary studies have not shown any major risks but there are no long term studies regarding this question.

So you don’t need to worry about that.

Other Dreaming Herbs To Consider

The passion flower is the dream herb used most commonly by people. The passion flower is a beautiful flowering plant that produces clusters of delicate, purple and white flowers from July to September. The flowers are edible and can be used as a mild tranquilizer or as a sleep aid for those who have trouble getting restful sleep at night.

Passion flower has been thought to induce prophetic dreams since the time of Ancient Greece.

It was believed to make the sleeper more aware during their dream state and it was popular with those seeking wisdom from the gods.

Mugwort (Artemisia vulgaris) is a perennial plant native to Europe and Asia. It is also called common wormwood, old woman, or old man. Mugwort was used in ancient times as a medicinal herb, although the information about its uses before the seventeenth century are scarce.

Mugwort has been reported to be an effective remedy for menstrual cramps, pain relief for childbirth, and as a stimulant for lactation.

Calea zacatechichi is an herb that is traditionally used by the Chontal Indians of Mexico. It is usually ingested in a tea form before sleep, but can also be smoked or taken in capsule form. Also known as “the herb of happiness,” it helps with vivid dreams and can help with any unpleasant nightmares. Sandalwood

You came here for Blue Lotus.

So, where can you actually buy it?

Accessibility: Where To Buy Blue Lotus

The Blue Lotus is easily accessible through online vendors such as this one, where you’ll find it being sold as a smoking blend, chai tea and as part of a crafted wild herbal smoke blend, and it offers a wide variety across multiple price points. 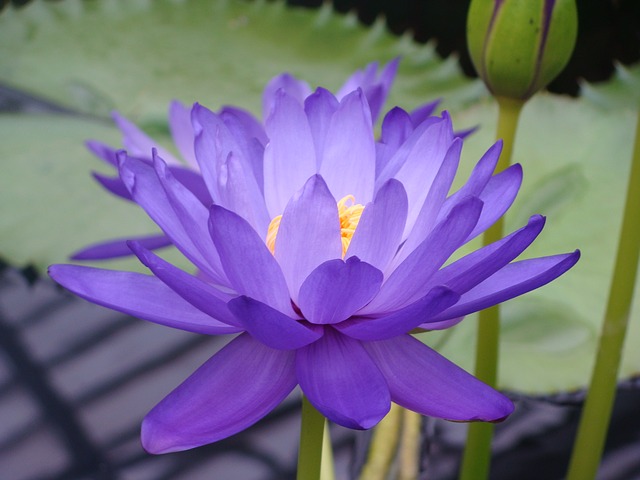 The Blue Lotus has travelled across centuries and boarders, spreading its fragrant aroma and unique healing abilities for all to enjoy, and today we have the full benefit of understanding and purposefully utilising these abilities.

While it may not be in the top tier of lucid dreaming aids, it is still a viable healing herb to use when experiencing any form of stress and/or depression.

Hopefully it’ll be legalised in the countries where it has been banned, because it is a mild plant with no seriously adverse side effects.

Click here to get a great price on blue lotus and start your journey into dreamland! (It will open in a new tab). You might also be interested in our summary of other lucid dreaming herbs or even our list of lucid dreaming pills!