Reading This Will Make You Care About Lucid Dreaming

Reading This Will Make You Care About Lucid Dreaming

The chances are you’ve heard about lucid dreaming, and thought one of the following things at some point:

These sorts of statements and questions may come up from time to time with regular lucid dreamers. Maybe your friends and family have said similar things to you? 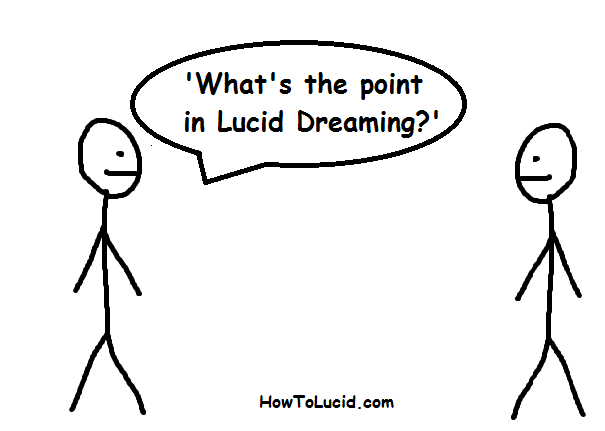 Well, maybe this post will serve as a cornerstone post explaining exactly why they and everyone else should CARE about Lucid Dreaming. People should want to learn about it and spread the idea and notion of controlling your dreams.

I have a few reasons and lots of ideas to share, also I’ve decided (as the result of a little spending spree) that I needed a graphics tablet to draw pretty pictures with so this is the first post which will have illustrations like the one you saw above.

Why should you care about Lucid Dreaming?

Think back for a second to when you were a child. Everything was an exciting adventure to you, right? Things were new every day and even the simple act of going to the woods to build a fort was like going to another world entirely.

This excitement becomes somewhat faded as we get older and things like work and relationship commitments, bills, all of this comes in to keep us busy and stop us having ‘childish fun’. Everyone has at some point in their lives been overcome with a dream.. A fantasy.

For me it was flying and for years I would watch films about superheros flying through the sky.. I’d watch ‘wingsuit diving’ videos and I’d think about flying all day long..

Then I started college, became overwhelmed with coursework and other things.. Developed a social life and started thinking about this fantasy less and less. I just didn’t have time to sit around like when I was a kid and fantasize.

Then after that came the time to get a job and start working to support myself. This again, took up more time and stopped me really spending any time at all thinking about flying or exploring alien worlds.

I’ve always had the itch to travel and to explore, but sometimes I just don’t have the time or money to do so. More on that later.. So as I went on in this way for a year or two I started getting an itch to think about flying.. 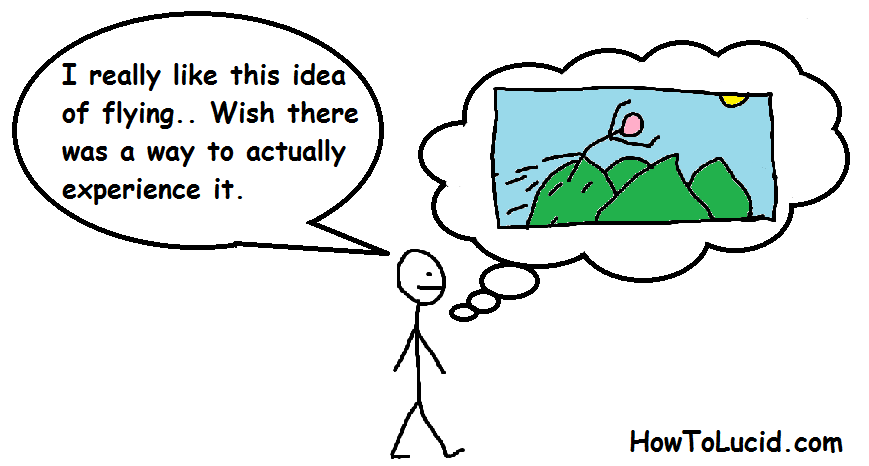 I’d have the occasional dream and sometimes I’d wake up having remembered the dream.. It was exciting as I’d have the vivid memory of flying the next day, and at that moment something changed.

That morning when I woke up I felt so happy, so alive and it felt like I’d just flown, even though it was only in my dreams, and I could only remember a little part of the dream. I realized that I had to explore this further.

I looked up online ‘how to have flying dreams’ and discovered there was a way to be able to control your dreams and actually to be able to ‘know’ that you’re dreaming, whilst you’re asleep.

This idea of Lucid Dreaming was totally new to me, but it opened my eyes to the reality which was this: Time is short in life, but with Lucid Dreaming you can utilize that time and do much, much more.

If you imagine that you sleep for a third of your life, and for most people that time is totally wasted! They just go to sleep, and wake up the next day having done nothing other than waste 8 hours of their life. Imagine if you could use that time, to explore your fantasies? You’re going to use the time anyway.. 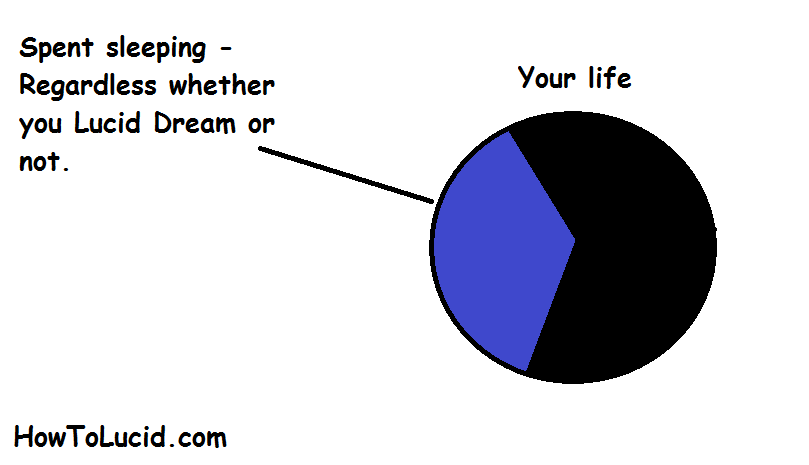 Now at this point there will still be a little bit of opposition, people after all, like to see a reason or a ‘point’ for doing something. 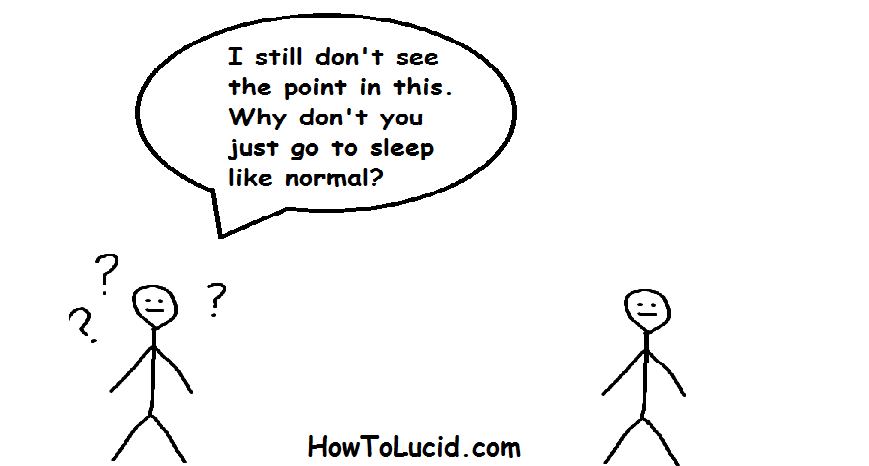 Before we go any further I’m just going to clear up something that this picture may have brought up. Lucid Dreaming doesn’t affect the quality of your sleep, so you’ll still wake up the same time and still feel as refreshed. If anything, you’ll wake up feeling better and more refreshed.

But, what’s the point?

Well, there are a few. Firstly, we’ve already explained that if you’re asleep for a third of your life, you may as well use that time if you can to explore your fantasies, but why?

These questions bring out the curious side in humans and urge them to explore.. To create, and to experience. If you had the chance to act out your fantasies, you would.. Because the definition of a fantasy is something that you deeply desire and want.

So there’s one reason already but I’m going to keep going and explore it a little further. The idea of experiencing things that you want in a dream is an interesting one.

Your brain can’t tell the difference

The brain is an interesting thing. The brain is unable to distinguish between imagined or ‘thought up’ events and real ones. Imagine your brain is like a TV screen.

As far as it’s concerned, everything shown on the screen has happened. Your eyes interpret the world and relay it to your TV screen (Your brain). In the same way, when you think about something, dream it or imagine it, the same image is shown to your brains TV screen. 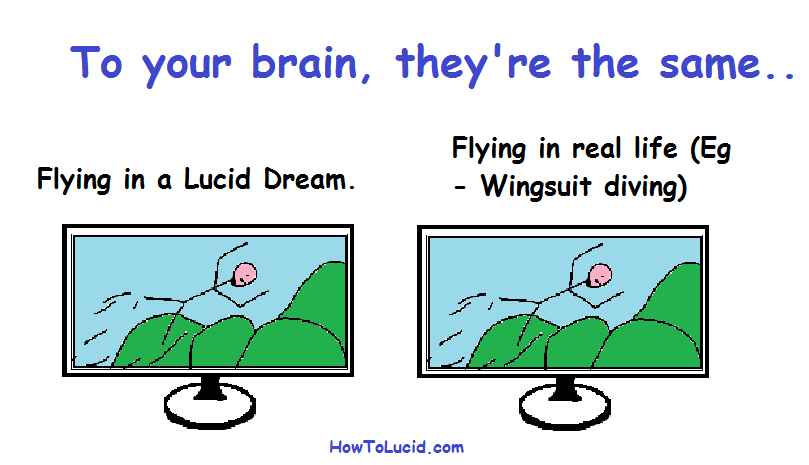 This means that if you dream about flying, the same signals fire in your brain that would if you were actually flying. You’ll get the confidence, the excitement and the sense of freedom when you wake up. It stays with you as if you’d actually done it.

I’ve practiced job interviews that I was nervous about in a dream, and the next day I woke up confident and prepared.

I’d already done the interview in my dream, so the real life interview felt like I was just doing it again. This is real and proven results you can get from Lucid Dreaming. You can use it to change your life. Think of things that you would like to practice without having to actually practice in real life.

Escaping a drowning car, Fighting off attackers, Practicing a job interview, Practicing a dangerous stunt, giving a speech to a large crowd..

These things can be rehearsed in a dream and the result from this practice will be real. The brain (specifically, the subconscious brain) can’t tell the difference between thoughts and events. If the thought is in your brain, it’s happened as far as your brain is concerned.

This can be seen as either a good or a bad thing. If for example you experience negative thoughts you will have negative memories and feelings. I don’t watch the news for this reason, but that’s another post entirely.

Think about this carefully. You have two situations..

A) Lucid Dream, fulfill your fantasies (Including sexual dreams), practice skills and get more confidence (and sleep for a third of your life) or –

B) Don’t Lucid Dream, but STILL sleep for a third of your life.

Either way, you’re going to be spending the time sleeping so why wouldn’t you utilize it? It’s free, easy to learn and has real results. It seems like a no brainer but many people don’t even bother to try simply because it’s not viewed as ‘cool’ by society and therefore a waste of time.

If you enjoyed this post, please share with your friends right now.. It helps me and it’s also a nice little thing to share with people. Also, you may want to read what a lucid dream feels like.

How to get started

Hopefully you want to learn how to start lucid dreaming now? To get started with lucid dreaming, there are a few things you could do: