WBTB Vs WILD For Lucid Dreaming: Which Is Better And Why?

WBTB Vs WILD For Lucid Dreaming: Which Is Better And Why?

Lots of people seem to be searching to find out what’s better, wake back to bed, or wake induced lucid dream. This is a fair enough question, but it’s one that I need to write about because there’s a key misunderstanding in this question. If you’ve typed this into Google, you’re in the right place, and I’ll explain everything.

Why your question doesn’t make sense

The main reason your question doesn’t make too much sense is I think a misunderstanding as to what each technique actually is, and what they involve. Let’s just do a super fast recap: 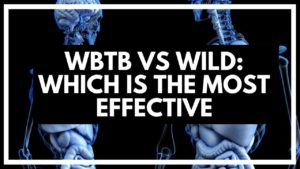 So which is better, WBTB or WILD?

The WBTB method for lucid dreaming works more often than the WILD because it’s timed right and involves your REM sleep. The WILD technique when sued at the start of the night just isn’t going to be as effective. The best time to try and induce a lucid dream (and remember that word, induce) is in the early hours of the morning, after sleeping for about 6 hours.

Remember though, this is the best method to INDUCE a lucid dream, as in to wake yourself up and then go to bed with the intention of lucid dreaming. It’s still going to involve waking yourself up and interrupting your sleep and that’s what you should try and avoid going forward long term.

But here’s the problem with the WBTB

The issue with interrupting your sleep regularly is that you never fully recover or rest. Our bodies need a full nights sleep every night to rest and recover from your activity during the day. If you’re constantly cutting it short just to lucid dream, you’ll end up feeling awful during the day, and that’s not the goal here. Lucid dreaming should make you feel BETTER not worse.

What’s the best technique to use long term?

Well, the best long term technique is one that’s more natural. I can’t say for sure what the BEST technique is because I don’t know. It depends on you personally, but for me it’s either the MILD or DILD. These techniques involve naturally becoming lucid without having to wake yourself up. The dream makes you lucid randomly.