Somnox Sleep Robot Review: How It Makes You Sleep Faster

Somnox Sleep Robot Review: How It Makes You Sleep Faster

Although it’s impossible to eliminate the concerns of everyday life, it is possible to find a way to get relaxed before bed despite worries.

This is the reason behind the creation of Somnox Sleep Robot, to guide people through relaxation in bed by using relieving sounds and respiration techniques.

The robot was created in the Netherlands by four robotics engineering students who were personally exposed to sleep deprivation during their studies. They designed the robot for themselves and their family members to help them get to sleep.

But why should you care? 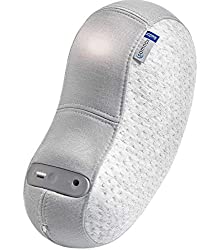 This device is a huggable, bean-shaped, soft relaxation aid designed to improve your sleep quality and help you feel refreshed when you wake up. It’s the world’s first sleep robot, one of the most innovative and unusual sleep technology products developed in recent years.

Somnox has been designed to be a useful, easy to use, and overall comfy product.

The ergonomic shape and the material used to cover the robot are the main contributors to its comfort. The shape of the robot has been designed carefully to be both enjoyable to use and easy to hug. The material used for Somnox is very soft to the touch, and also removable so it can be washed.

The bean-shape is designed in such a way to ensure that when people are hugging it, they maintain a natural position. This way, they don’t deviate from the natural alignment of the neck and shoulders.

But is there any science behind these claims?

The science behind the robot is pretty simple; the human nervous system contains two branches.

The sympathetic one, also known as the stress response and the relaxation response or parasympathetic branch. Ideally, both systems should be balanced, but our nervous system can get overwhelmed with stress chemicals as the stress accumulates over time.

Without the normal counteraction of the parasympathetic branch, the sympathetic one can be continuously active. As a result, the imbalances in our body arise, including anxiety, increased heart rate, poor digestion, constipation, shallow breathing, poor sleep quality, etc.

The most significant consequence of this is the unbalanced autonomic nervous system and hard to retrieve relaxation response. The parasympathetic response is activated by deep conscious breathing, and that is why it’s the main feature of the Somnox sleep robot.

Scientific research has proved the benefits of sleeping with a breathing object.

Evelyn Thoman and Evan Ingersoll, from the University of Connecticut, researched infants who slept with a breathing bear.

The research has shown that the infants adapted their irregular breathing to the bear’s regular one, and thus, improved the quality of their sleep.

Somnox uses the concept of entrainment, which states that an irregular rhythm will gradually match the entrain, or phase, of a regular rhythm.

But does it work?

How Can Somnox Improve Your Sleep

We spend a third of our lives sleeping, and the quality of that sleep significantly affects our mood and productivity the next day. Unfortunately, due to stress and anxiety, 1 in 5 people don’t sleep well on a nightly basis.

The primary function of the Somnox is its ability to simulate a specific breathing rhythm, which is slower than your usual one. It does this by expanding and deflating as if its taking relaxing, deep belly breaths.

Since humans are very skilled at breathing synchronization during sleep, the sleep robot is supposed to make you mimic its breathing. By mimicking the slowed-down breathing pace of the Somnox, you’ll be able to obtain the sleep-time benefits.

For the sleep robot to help you fall asleep, you need to place it close to your body and position either your hand or arm on its ‘belly’ so that you can feel it “breathing.”

Lay in bed, in whichever position you like with your eyes closed, listen to the robot’s sounds/music, and feel its respiration. Try to breathe in synchronicity with the robot, but don’t worry if your breathing doesn’t sync up at the beginning.

As the Somnox’s breathing rhythm slows down, you should breathe in and out deeper and deeper until you fall asleep.

Somnox is straightforward to use; it has an app that configures the music and the breathing patterns. The app also lets you chose the length of time for which the robot is active during the night.

The Somnox doesn’t provide any sleep tracking data or a smart alarm at the moment, which is a little unusual for a sleeping aid. But the company says that they are working on the smart alarm.

And that all of the required sensors for sleep tracking are inside the robot, they only need to be activated by a future update.

What else can it do?

Besides the breathing regulation, Somnox also includes a feature of sophisticated music and sound playback system. In tandem with the breathing, it can play any sound, such as lullabies, white noise, guided meditation, audiobooks, or even custom recorded sounds.

Pleasant sounds and music play a crucial role in achieving a person’s quiet feeling and in relaxation. Music is thought to be a key to serenity and peace, and the healing skills that it possesses are considered as its natural quality. So, it’s no coincidence that some clinical environments might use it as noninvasive therapy.

If you or someone you know has anxiety, insomnia, or some other sleeping difficulties, this product could be of great help.

Besides, they offers a 30-night money-back guarantee, so if you have deep pockets, go for it and test it out for yourself.

Overall, I like the idea of Somnox; it does what it’s supposed to do. But to justify its price tag, there is still room for improvement. We believe it will be worth it once they utilize all the features that aren’t yet active. Check it out and learn more about it.

Other ways of falling asleep faster

There are of course some other ways of falling asleep faster, the main ones being: