Lucid Dreaming In Divergent – This Film Explains It In One Scene

Lucid Dreaming In Divergent – This Film Explains It In One Scene

The film: ‘Divergent’ contains a few scenes which REALLY show how a lucid dream feels. It’s no surprise that the main actress, Shaliene Woodley is a lucid dreamer.

It’s a film about  a world divided by class and character, in which people must choose a faction of people to belong to, each with their own characters and personality traits. People that don’t belong to any of the factions are called ‘Divergent’ because they don’t conform to any of the predetermined groups of people.

In this film, the lead character, ‘Tris’ played by Shailene Woodley discovers that she’s Divergent, and doesn’t belong to any of the factions. They have a test, or initiation into the factions which invokes sitting down on a chair and having a serum injected into you.

This serum causes you to hallucinate and see whatever you fear most. This will start to make sense in a second, as it’s closely linked to Lucid Dreaming. So the serum makes you see what you fear most, and it appears very real.

You see your fear and it interacts with you. If you’re scared of drowning, you would experience yourself in a tank which slowly fills with water. The test is designed to see how people react to fear, and therefore place them in a group which have similar reactions to the things they fear. The interesting stuff starts when Tris realises she doesn’t react to fear in the same way.

She experiences the things that she fears the same as everyone else, but what she does next is different..

When Tris sits down on the ‘fear chair’ and the hallucinations kick in, she quickly finds herself in the middle of a simulated reality. Normally, you’re not supposed to realise it’s simulated, but she somehow does. She sees herself in the reflection of a puddle on the ground, and this causes her to do a reality check.

She says to herself: ‘This isn’t real’ and from that point is able to escape the fear in the simulation, in this example, a flock of birds swooping down to tear at her face with their talons. She does a reality check and is able to escape, sound familiar yet? It should do..

In a Lucid Dream, from the moment you realise it’s a dream, or ‘this isn’t real’, you are able to control it. You become the master, and the things that were scary before become harmless, you can dismiss them easily. I didn’t expect to find an example of Lucid Dreaming in Divergent, but there it was!

That one quick scene, where Tris is escaping the birds and realises it isn’t real is a very effective summary of Lucid Dreaming. It’s all about realising it’s a dream, and from that you’re able to overcome your nightmares, fears and you’re able to control the dream. It’s managed to sum it up in one scene. Pretty cool?

If you haven’t seen Divergent, here’s a link to get it now, it’s a really good film and well worth a watch. Once she realises that she has this power and that she’s ‘Divergent’, she is able to overcome all following ‘nightmares’ or fear simulations by doing her reality check, which is seeing herself in a reflection. 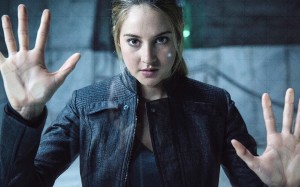 Whenever Tris sees herself in a reflection she instantly realises that the whole thing isn’t real, and is able to do what she likes. It’s interesting as the film goes on that it shows the people around her who don’t have this ability becoming paralysed with fear after their simulations.

It highlights the fact that Lucid Dreaming can help you to overcome your fears, and once you know how to recognise that a dream isn’t real, you become the master of your own dream world. Lucid Dreaming in divergent is a great introduction to the topic of controlling your dreams.

Shailene Woodley is a Lucid Dreamer!

It will probably come as no surprise to you that the actor who plays Tris in Divergent is actually a Lucid Dreamer herself, and was probably very excited to be able to include this interest in Divergent. Even though it was not a direct reference to Lucid Dreaming, it comes pretty close!

It’s so nice to see an actress who’s interested in Lucid Dreaming and managed to slip in a reference to it in one of her films. Divergent really is a great film to watch. This leads us onto reality checks, and how simple they can be to use..

They use reality checks in the film

In this film, Tris performs a reality check of sorts, by looking at herself in a reflection.

This causes her to question whether things are real. It doesn’t show this in the film, but that’s probably what’s going through her mind, as after seeing herself n a reflection, she says out loud; ‘This isn’t real’, and then proceeds to control the simulation/dream and escape her fears.

This can be done in a Lucid Dream, by anyone. Once you realise that it’s not real, nothing that scared you before will bother you. you’ll be able to shake off fears and nightmares as if they were just simulations. As outlined before, Reality checks are very important. They work by causing you to link an action to a thought.

You have your action; the physical reality check, such as looking at your hands or checking the time, and then you link it to an idea; the question: ‘Am I Dreaming?’ or ‘Is this Real?’.

For more see: How Do Reality Checks Work? This type of reality check is very powerful and you’ll be able to overcome your fears just like the Lucid Dreaming example in Divergent.

Want to get started?