In this review, I’m looking at the Limina mind machine from Mindplace. It’s their BEST mind machine so far, and it’s the best value for money mind machine I’ve seen, EVER. 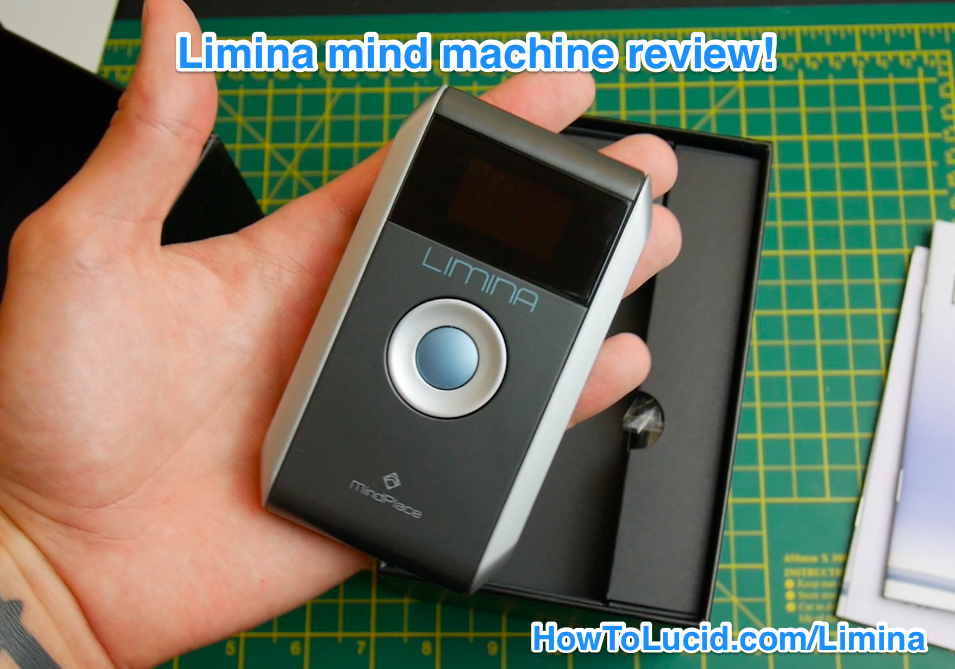 In this article, I’ll cover:

By the way, I made a FULL video review of the Limina including unboxing and trying out al the features over two weeks. See that below:

How do mind machines work?

Mind machines work by combining binaural beats with VISUAL stimuli shown to your eyelids. It’s a complex process which is usually only possible with a mind machine or a meditation device. This actually changes your brainwave state while listening and for some time after.

You may have heard these things being called various things like:

And many more things like that. They all usually refer to the same thing which is a device that can help you meditate.

The way they work is by creating a ‘frequency following response’ within your brain. By training yourself in this way, you can guide your brainwaves into certain frequencies and shift how you feel and perform.

What do mind machines do?

Mind machines allow you to decide which brainwave frequency you want to be in, and how you want to feel. They can help with ALL SORTS of things, like lucid dreaming, sleeping better, or focusing.

What they DO really depends on which track you listen to, and for how long. To get a better idea of what they do, you should really either watch my video about mind machines or try one out for yourself!

Why the Limina is so great

So, specifically today we’re talking about my all time favorite mind machine, the Limina. I’m really excited about this, and in my opinion this is like the Tesla of mind machines. It’s really well designed, and I just don’t see anything out there competing with this, in a real way.

Most of them are okay, but it’s not very often I’ve found one I LOVE. The thing is, with any product really, you have to actually want to use it, for it to be really effective. This is where the Limina starts to pull away from other devices.

It’s actually really easy, and fun to use!

Not to mention it works great in terms of the brainwave entrainment effect it produces. I feel the effects very strongly even just after 5 minutes or so of certain tracks on the device. They’re created really well, but that’s actually not the main selling point of this.

First, let’s just go through what you get when you order a Limina:

What’s included with the Limina package?

In the Limina package, you’ll get several things, including:

I really like how easy it is to connect up the headphones and the goggles because in previous mind machines, the jacks were on opposite sides of the device. 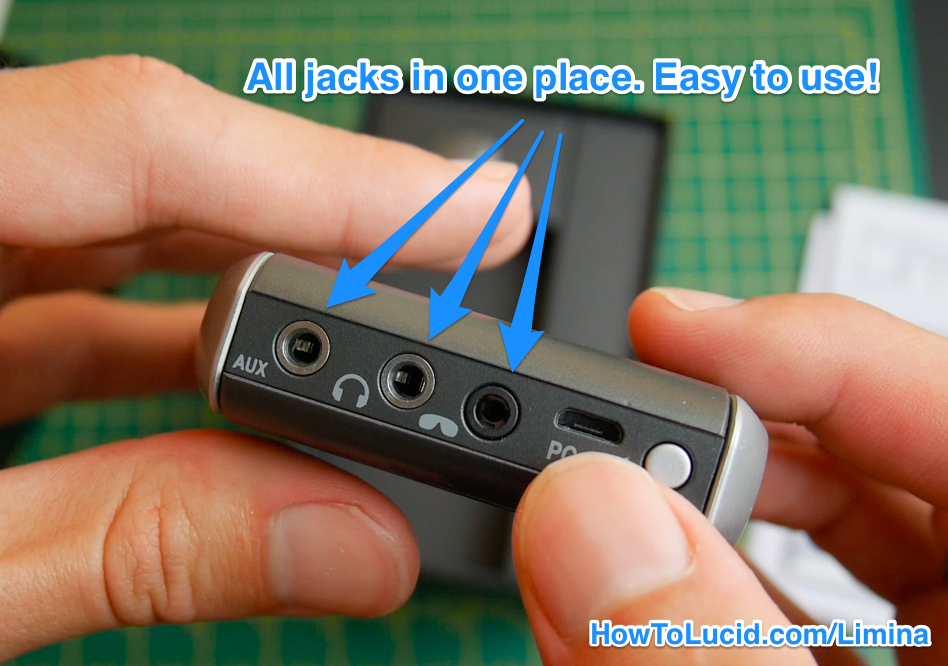 Pros of the Limina mind machine

One of the things I REALLY like about the Limina (there are many) is that it’s SUPER sleek and lightweight. This means unlike some previous mind machines, it’s actually easy to travel with.

As someone who travels a lot, and likes to save space, I really appreciate that. I think one of the most annoying things for people using mind machines is being able to take it around with you, to use at work for example at lunch.

You don’t want to be carrying around a big bulky device, and that’s why the Limina is perfect for most people.

It lets you customise the binaural beats you’re listening to. You can decide exactly which binaural beats to listen to, instead of being confined to particular tracks or arrangements.

I also really like that you can easily see the volume, brightness and battery levels at the top of the screen. 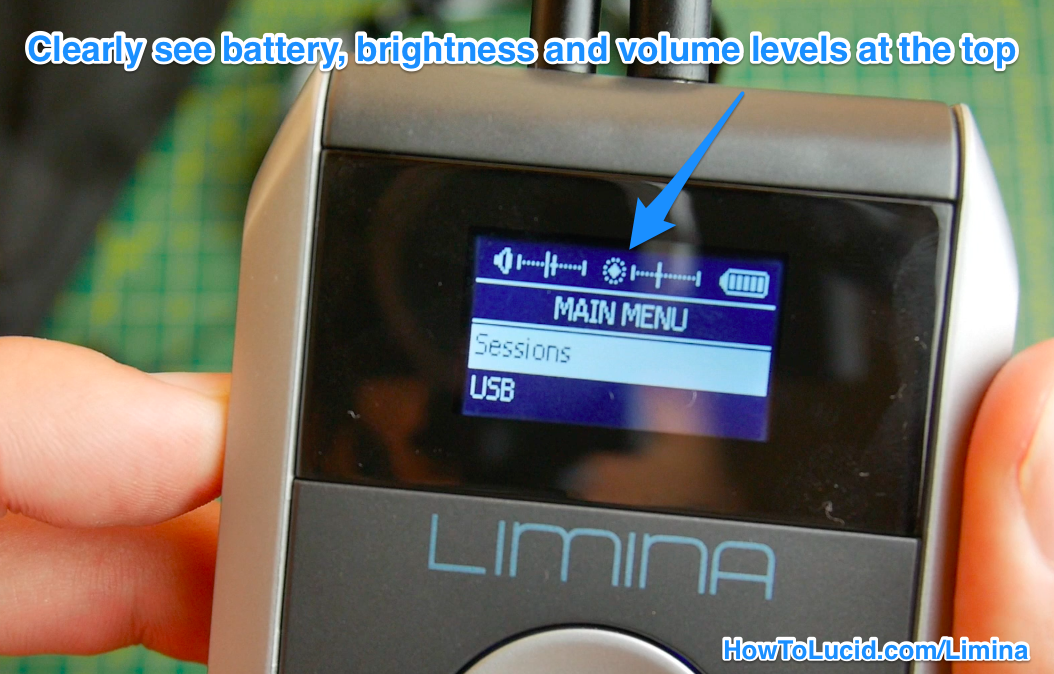 The only thing I didn’t really find great was the menu system. Because it can only show two list items per screen, it can take a while to scroll through the menu. That being said, the menu is a big improvement over the Procyon menu, which is literally just one button to scroll through, and just digits on the screen.

At least with this menu, you can read the track names and view information about the track you’re listening to.

As someone who likes the small details, I really appreciate that.

Not only that, but you can actually change and alter the specific binaural beats frequencies with the Limina, a feature that’s been missing from most other Mindplace mind machines over the years.

In my opinion, the Limina is the best mind machine at the time of writing this. It has most if not all of the features of similar devices, but it’s also very affordable, easy to use, and simple to program your own tracks into. The quality of the tracks it comes with are also really high too.

But that being said:

It’s hard to say what the BEST mind machine is, because it might be slightly different from person to person. What I can say though, is that the Limina is the best VALUE mind machine out there, for me.

It’s just got the best features for the best price.

Limina review summary: I have also been personally using it for a while now, and it’s super reliable. I love how it looks, and it’s really lightweight as well. If I had to choose only ONE mind machine to buy as a first time user, I’d choose the Limina.

To see other mind machines, read these: