DAVID Alert PRO Mind Machine Review 2022: What You Should Know

DAVID Alert PRO Mind Machine Review 2022: What You Should Know

The DAVID Alert PRO is a fairly interesting mind machine because it doesn’t have a screen. There are lots of features here which I want to talk about..

Before we jump in, I’d like to just take a moment to introduce mind machines to you because there’s a chance you’ve not heard of them and don’t know how they work.

I won’t go into what mind machines ARE, because I have a post for that but here’s roughly how mind machines like the DAVID Alert PRO works:

The device plays binaural beats and other types of brainwave entrainment to you through stereo headphones. At the same time, the device flashes visuals of colored flashing lights into your eyelids.

This is done while your eyes are CLOSED (otherwise you could damage your retinas) and is designed to move your brainwaves into a certain state. There are MANY benefits of binaural beats, but when you combine them with things like the visuals in the goggles, some amazing things start to happen. 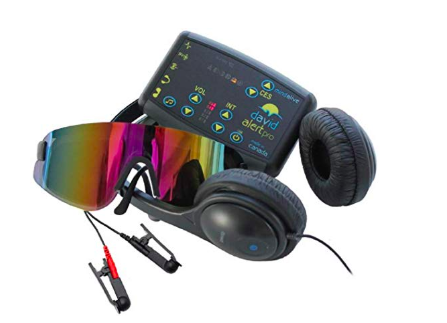 So the DAVID Alert is an alternative to their other device, the DAVID Delight pro. The main difference is that the ALERT contains extra sessions designed and developed by an expert in ADD/ADHDH.

From what I understand, Michael Joyce used the DAVID DELIGHT Pro in a number of studies and found a way to create sessions that would encourage treatment of ADD/ADHD symptoms. This is a big breakthrough and so Mindalive actually released a different version of the mind machine with these sessions included as default.

For that reason, the price of the DAVID ALERT pro is slightly higher than that of the DAVID Delight pro because of these extra sessions. In my opinion, it’s a good deal whichever one you get, but I’d probably go for the david delight pro if you don’t have ADD or ADHD. If you’re just looking for a mind machine to help you focus and study, then both models have what you need.

This is an exciting feature of the DAVID Delight mind machines like the alert and delight. Cranio-Electro Stimulation (CES) is a way of stimulating the brain to produce hormones by producing a small pulsing electrical current across the head.

This is MASSIVE news and a big improvement on the Kasina. I’ll be doing extensive comparing of these types of mind machines in the future but this looks very promising. The hormones this stimulation helps you produce are:

Interestingly those are the ‘feel good’ hormones we’re all familiar with. Being able to stimulate the brain to produce them naturally (of un naturally depending on your stance) with electrical stimulation is very interesting.

Turns out in the greek and roman times, they actually used electric eels to do the same thing! Since then the concept has sort of been ignore or lost among most people but recently there’s been a surge of interest in these old techniques.

The research and science hasn’t quite caught up yet though. I can’t find any meaningful studies that show it works or has an effect but I can find lots of subjective reviews and people saying it’s worked wonders. All I can say is it’s a very interesting thing and I think as a bonus feature of this mind machine, it’s HUGE.

The mind machine would have a great effect, even with no electrical stimulation, much like other mind machines. The fact that it has this extra feature and it doesn’t even cost that much more, is a big tick for me.

I’m not aware of any side effects of this device, however you should do your own research on this. contact them before buying and exercise caution if you think you might have epilepsy, or anything heart related.

As this product does stimulate you electrically, it’s probably worth checking with your doctor if you’re able to use it. Although it’s only a TINY stimulation on the head, if you have something like an electric pace maker or anything like that, there’s always that small chance it will be affected, so make sure you know what you’re doing.

Where to get the David Alert Pro

As I’ve been researching mind machines and meditation devices, I have of course reviewed and tried quite a few of them. Here are the most popular and the best performing mind machines that you might find interesting.