Cats and Their Strange Connection to the Supernatural World

Cats and Their Strange Connection to the Supernatural World

There’s something quite intriguing about cats. Throughout history, the feline species has been treated with great respect by many different cultures and civilisations. In fact, some cultures have even worshipped the cat as a God-like figure. So, what makes cats so special?

Cats are unlike any other animal, because of their connection to the supernatural world. Cats have often been regarded as linked to the supernatural, and even the paranormal. Their unique abilities and skills should never be underestimated. There’s much more to a cat than a fluffy, cuddly pet.

Also, cats can be a very common dream symbol that lots of people dream about, partly because we see cats almost every day but also because of their connection to the supernatural and the dream world.

What’s So Special About a Cat’s Senses?

Cats are known for their sharp senses. A cat’s eyesight is quite unusual. By day, their vision isn’t quite as good as a human’s, and their perception of colour is very different to ours. Because of the different densities of photoreceptors in cats’ retinas, they see dulled versions of colours, and they’re not able to focus clearly on anything 20 feet or further away from them.

But by night, a cat’s eyesight is incredible. They can see clearly in the dark, enabling them to pick up quick movements. They can also see well in dim lighting. Much better than we can, in fact! 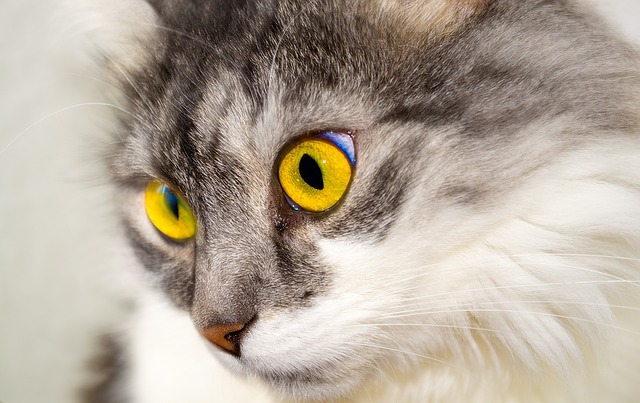 It’s long been believed that through their unique sense of sight, cats have been able to sense auras and energies better than any other animal. And that definitely includes humans! Those who follow the paranormal and the supernatural believe that cats are able to see the auras of the living and the dead. This goes someway to explaining why cats have always been held in such high regard throughout history.

Many humans have reported ghostly sightings. When describing what they’ve seen, people will often indicate fuzzy, blurred figures, or anomalies in the light which they can’t explain. People might say they’ve seen a shadow, or a shape similar to a human form. But they very rarely see ghostly apparitions as complete humans. This might be down to our eyes.

If a cat comes across a similar ghostly apparition, it stands to reason that they’d be able to see it in much better definition, because of their excellent eyesight and ability to process visual images in complete darkness. So, a cat would see the figure complete with flesh and bones, as they might have looked when still alive.

Have you ever seen a cat staring out of the window, deep in concentration, but found you couldn’t quite work out what had grabbed your feline friend’s attention? Some people believe that, in this situation, the cat is staring at something we can’t see at all.

On the low end of the scale, a cat’s hearing is quite similar to a human’s. But with higher-pitched sounds, a cat’s hearing really begins to excel. Their range of hearing is estimated to be 45 to 64,000 Hz, a much broader range than that of humans, which is 64 to 23,000 Hz. So cats can hear sounds which are far too high pitched for any human to detect.

The shape of a cat’s ear has been designed to draw sounds right into their ear canal. It’s this that gives them their uncanny ability to detect seemingly insignificant sounds, for example a mouse rustling in a bush tens of feet away. Interestingly, the higher the pitch of the sound, the better a cat is able to detect it.

It’s this reasoning that leads people to believe that a cat might also be able to hear paranormal sounds which no human would ever be capable of hearing. Even if a sound is far too faint for us to hear, a cat would be able to detect it easily.

It’s no secret that electromagnetic energy and hunting go hand in hand. Sharks use their ability to detect electrical signals in the ocean to enable them to hunt effectively. Cats can do exactly the same thing. It’s what makes them such great hunters (much to the dismay of many a cat owner when confronted with a little present from their dear pet!)

If this is true, and electromagnetic energy is emitted by paranormal figures, it goes without saying that a cat would be able to detect this. So, if your cat seems to be acting strangely, or appears to see or hear something that you can’t, this could be the explanation you’ve been looking for.

Not only are cats known to be able to detect electromagnetic fields, they can also influence this energy. This is why many people feel happy and relaxed when in the company of a happy feline, and in contract, people will often feel quite anxious or on edge if their cat seems distressed or angry. There’s much more to a cat’s mood than we might previously have thought!

When we think about cultures which have held the humble cat in high regard, the first one that springs to mind is Ancient Egypt. The Ancient Egyptians worshipped a cat goddess called Bastet which was represented as half cat, half female. The city of Bubastis was a known centre of worship for Bastet.

Considered sacred amongst Egyptian society, the penalties for harming or killing a cat were incredibly severe. Historian Herodotus wrote that when a cat died, an entire household would enter a period of mourning, similar to when a member of the family passed away.

The cat was also known as a goddess by the cultures of ancient China and ancient Japan. In fact, in the present day the cat is still an important part of Japanese culture and a symbol of luck and wealth.

By contrast, European cultures have often thought of cats as both a guardian of life and a symbol of death. That’s why cats are often associated with witchcraft. In Transylvania, Romania and Hungary, people believed a cat would be able to turn a dead body into a vampire. So, there might be a darker past to the felines we know and love than previously thought!

What Makes Cats So Important to the Supernatural World?

It’s no secret that cats are incredible animals. From their amazing abilities to sense electromagnetic fields, to their ability to see in the dark and hear the most insignificant sounds from so far away – it seems like cats’ abilities are endless! So, it goes without saying that human beings might not be able to understand the true capabilities of our feline friends.

We’re intrigued by the idea that cats might know a lot more about the supernatural world than us humans. And we’ll certainly keep an eye out in future if we spot a cat staring into the distance, gazing mesmerised out of the window or chasing something which we can’t even see. Who knows what they might really be looking at? If only they could talk…