Can we sleep for less time and feel MORE rested? Not usually. But what if we slept TWICE in a 24 hour day, for just a few hours each time? Welcome to BIPHASIC sleep.

But does it work?

If you remember the kindergarten, you must remember those annoying mandatory naps that were part of the everyday schedule. Some kids dislike those naps, while others enjoy them. Little did we know that those childhood naps were highly beneficial.

Still, as we approach adulthood, most of us are trained to compress our sleeping habits into one overnight block of sleep time.

Now, as adults, we’re all sorry that those power naps aren’t mandatory at our workplaces like they were in kindergarten.

Modern research suggests that the monophasic pattern isn’t as beneficial as biphasic patterns we had as children.

But before we get acquainted with biphasic patterns, let’s talk about sleep, and why we do it.

Sleep is a naturally recurring state of your body and mind. During sleep, your consciousness is partially suspended, along with your sensory activities and abilities.

Also, following the inactivity of the conscious part of your nervous system, the body relaxes the postural muscles, to keep you from acting out your dreams. During the sleep state, your eyes are closed.

Sleep is vital to human health, and the amount a person requires is different for everybody. It’s also age-related, but it can be related to some other things as well. Rest, just like any other bodily function, has several different stages and patterns.

During sleep, your body and brain have a lot of things going on, and a lot to deal with.

So, while your consciousness is lying on the bed doing nothing, you are going through several sleep cycles and stages.

An average human goes through about five cycles during their sleep. Every cycle lasts about 90 minutes, and it’s divided into two major stages: the NREM and REM.

NREM or Non-rapid Eye Movement stages account for approximately 75% of the adult sleep cycle, in which your brainwave and muscle activity decreases. 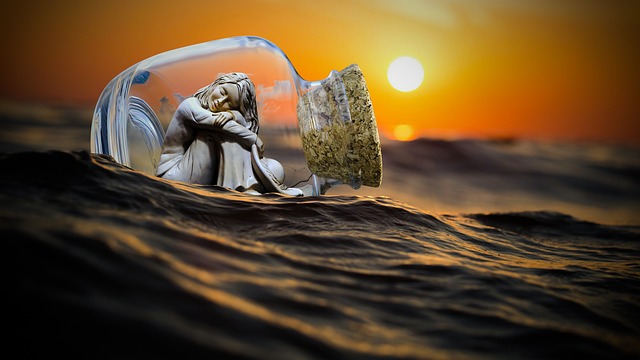 Also, your temperature rises, while your heart rate goes down. During the NREM stages, your body is relaxed, with your temperature, blood pressure, and breathing reduced.

REM, also known as Rapid Eye Movement, follows the NREM stage. This stage is different because the brain is active, but the body is paralyzed. Dreams usually occur during this stage.

You can think of it as an internal biological clock that tells you the correct time for your body to go through a particular process.

Certain sleeping habits can affect your productivity and overall health. Failure to get enough sleep can lead to sleep deprivation, which can be detrimental do our health. So, getting a good night’s sleep is essential.

Different people have different sleeping habits, some of which are beneficial, and some not so much. Some people prefer to sleep for a single block of time, usually during the night.

Others sleep less during the night but take full advantage of power naps, once or twice during the day. Sleeping habits are affected by many factors, like your circadian rhythm, environmental conditions, age, etc.

A brief history of Biphasic sleep

The monophasic sleep cycle became the norm during the industrial revolution. During that time, people had to adapt their sleeping habits with their longer-than-normal working hours.

So, they slept for a single duration of time, usually at night.

This sleep pattern is now regarded as a regular sleeping pattern, though it’s discussed that it isn’t the most natural type of sleep for humans.

Polyphasic sleep schedule allows you to sleep less than 6 hours a day, and still be efficient.

Sleep is usually segmented into one long rest period followed by several naps, or several rest periods spread evenly through the day. However, this sleep pattern isn’t suitable for everyone, as we’ll discuss later.

Biphasic sleep schedule consists of an extended period of rest that lasts for 5-6 hours, and a nap or two during the daytime.

But is it good for everyone?

Polyphasic sleep pattern gained its popularity on the internet as a new “bio-hack,” promising more efficiency and less rest time.

The main idea is to increase your wakefulness, and decrease your rest time by making it more efficient. Through initial sleep deprivation, the altered sleep cycle would trick the body and the brain into entering REM sleep almost immediately.

This way, your sleep-deprived body, adapts itself to achieve the necessary amount of rest, by reducing the time spent in a light sleep state.

Is the biphasic sleep pattern healthy?

Keep in mind that human physiology is almost impossible to change, not without severe consequences. Some things you can’t “bio-hack,” like nighttime melatonin release.

Following any polyphasic sleep pattern will most likely deprive you of sleep, which can result in many serious health issues.

Some people, about 3% of the world’s population, are naturally polyphasic sleepers and sleep less than 5 hours a day. But that’s thanks to certain gene-mutations, and most of those people are diagnosed with a specific form of mania.

What is a biphasic sleep pattern

Human babies are natural polyphasic sleepers, with their rest slots spread throughout the day. However, they gradually LOSE their nap time slots, reducing the number of naps, but increasing their duration.

By the age of one, MOST children become BIPHASIC sleepers.

Biphasic sleep pattern is a sleeping schedule with TWO rest segments, which is more common than most people think. Research has shown that up to 60% of adults follow some biphasic-type sleep pattern.

This shouldn’t come as a surprise, considering that humans naturally have an energy drop in the afternoon, usually after lunchtime. This energy drop and the feeling of sleepiness is a part of the human circadian rhythm.

Many people who stick to this sleep schedule get enough sleep and rest, and don’t experience daytime fatigue, or sleepiness.

Of course, there are different types of bimodal sleep patterns:

The first type consists of two sleep sessions, both happening at night. Historically, the middle of the night break between sleep periods was used for reading, studying, eating, and lovemaking. To this day, most babies are conceived around midnight.

References to biphasic sleep can be found in literature, over 500 of them, dating back to the 14th century. Today, some religious practitioners wake up in the middle of the night to pray, returning to sleep afterward.

These regular prayers break up the night, creating a biphasic sleep cycle for those practitioners. People following these religious practices have good sleep hygiene and healthy cycles. With both sessions happening at night, this type of sleep style yields approximately six to eight hours of sleep.

People following the second type of segmented sleep have their first sleeping session at night. It lasts for about 6 hours, which is more than enough for your body to go through several sleep cycles.

This way, both your body and mind get the necessary rest.

The second session occurs sometime during the day and lasts about half an hour. These 30-minute naps help restore your energy and alertness, and also help improve your mood and performance.

The third type of pattern is the long nap schedule, used by people who sleep only 4-5 hours a night.

4-5 hours of sleep works for only a handful of world population, so it doesn’t satisfy the need for an average human. However, with this schedule, the day sleeping session lasts longer – about an hour and a half.

Since most humans suffer an energy drop in the afternoon, the long nap, called a siesta, helps you replenish your energy. Siestas are great since they last for about an hour and a half, which means you go through one full cycle during your nap.

The power of naps

Naps are brief periods of sleep, which help you overcome daily sleepiness and improve cognitive performance.

Napping can lower stress, recharge your will power, and it’s linked to lower rates of heart disease and inflammation. There are two types of naps associated with biphasic sleep: short naps, and long naps.

It’s vital not to exceed 30 minutes of napping, or you risk entering into NREM and REM stages of sleep. Sleeping for longer than 30 minutes can leave you with sleep inertia, a feeling of grogginess and disorientation.

Also, short naps are meant to be short, as not to disturb your circadian rhythm and your nighttime sleep.

But what about siesta?

Long naps, called siestas, usually last up to an hour and a half. This habit is associated with many benefits, along with a 37% reduction in coronary mortality, due to reduced cardiovascular stress mediated by daytime sleep.

Lasting for approximately an hour and a half, long naps allow you to complete one cycle resulting in more rest. Napping for this long can produce impairment from inertia, though that usually lasts only a couple of minutes.

The results of this type of midday sleep are many. You may experience better focus and cognitive performance, restored alertness, energy, and an increase in productivity.

As a part of a bimodal pattern, in which you sleep only 4-5 hours a night, long naps shouldn’t disturb your nighttime sleep.

Napping can rarely have a negative effect on other sleeping periods, though it can happen if you take a nap too late in the day.

Sleep is an essential component of our health, and also our hormone production. Rest is necessary for our body and mind.

There’s nothing that can replace a good night’s sleep.

Though we start our lives as polyphasic sleepers, according to experts, biphasic is the most natural pattern for adult humans.

No matter the type, this pattern allows you to have a good night’s sleep, which is essential for your nighttime melatonin release. This hormone regulates blood pressure, synchronizes the circadian rhythm, and boosts the immune system.

You may choose to have both sessions at night, going early to bed, and interrupting your sleep at around midnight. You can use this time of quiet to read, study, or pray. The interruption doesn’t affect the benefits of bimodal sleeping.

If you don’t like interrupting your night sleep, you can take naps to increase your energy during the day. Short naps are great, since they restore alertness, without the risk of sleep inertia. This makes them great for people who have to be response-ready.

Or, if you’re sleeping for only 4-5 hours during your night session, longer naps can help you restore your energy levels for more extended periods. Though siestas can produce impairment due to inertia, the benefits are enormous.

People experienced increased alertness, improved performance, and a better mood. These naps also help us get through our midday energy level drop, produced by high temperatures or heavy food intake.

In conclusion, a biphasic pattern is the most natural and healthy way to sleep. Following this schedule, you may experience better mood, increased alertness, better cognitive performance, and improved productivity.